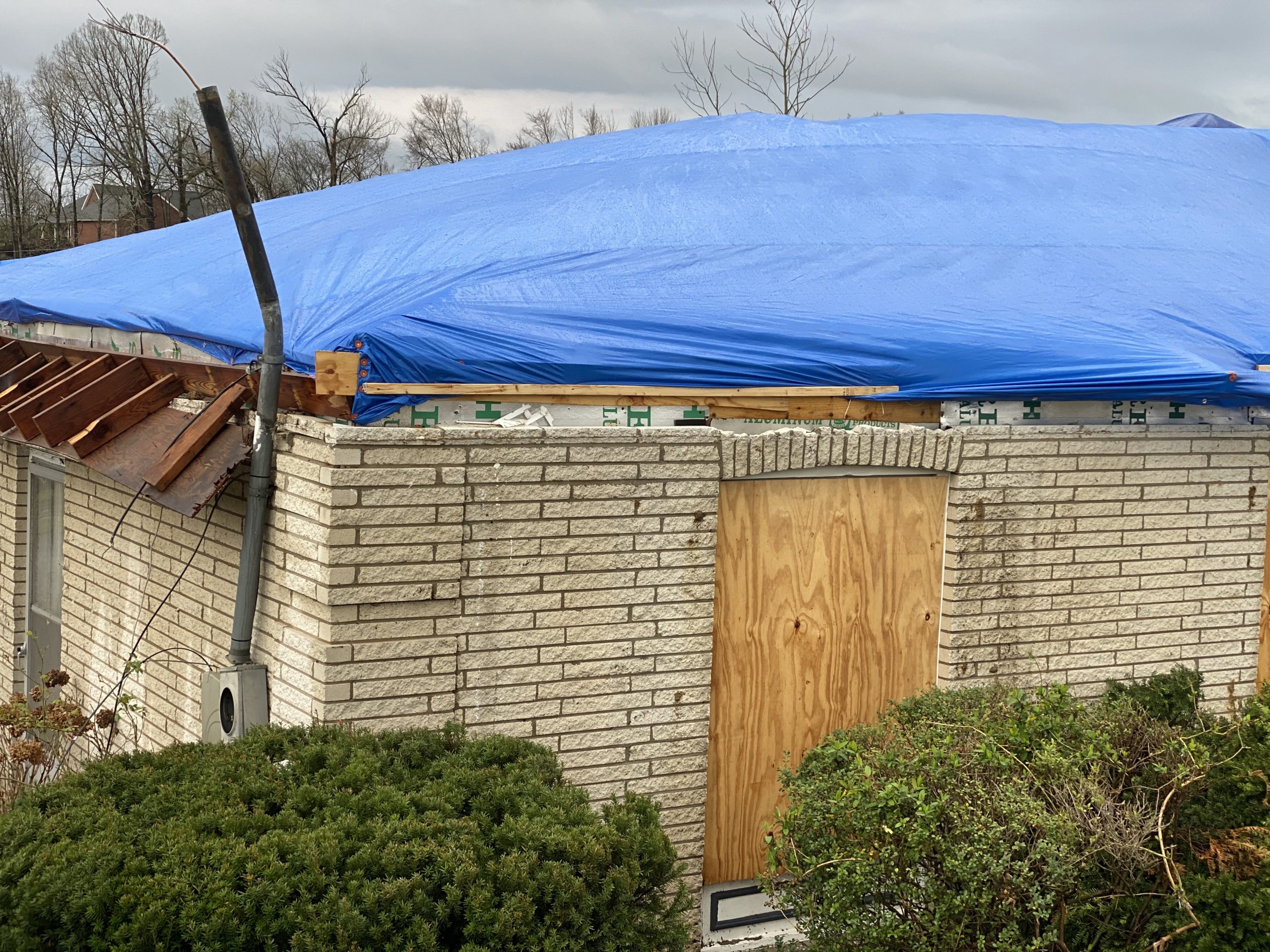 So the next day we started out on Robert’s roof.  He had a two story home with a tree that had fallen on the house with the top of the tree actually lying on the roof.  The 2nd floor wall was heavily damaged, sheathing was gone and the roof was pierced revealing broken rafters and ceiling joists.  We cut as much of the tree off of the house as we could, however, the bulk of the tree was going to have to be removed with a crane due to its massive size and our time constraints. We were able to tarp the roof where we could until the tree could be removed.

From Robert’s home we moved onto Nancy’s house which was in an area we had not yet been to.  When we arrived, we were in complete shock as her home was on the edge of the straight line path of total devastation left behind from this tornado.  All the homes to the left of hers were gone.  The house directly across the street no longer existed.  There was nothing left but what appeared to be piles of sticks and garbage.  Nancy’s home was right in the transition area from total devastation to damaged homes.  Her house was missing an entire garage roof measuring 25 x 25.   The roof on her house was also heavily damaged with a one portion of the roof missing completely.  The portion completely missing covered a garage conversion which housed her game and sewing rooms and measured roughly 25 x 25.  The roof framing was just gone in spots with other areas of damage where the framing is now unstable due to being lifted by the storm but not totally torn off. We had to construct a makeshift water shed structure just so we could tarp the roof.  We used a lot of tarps to accomplish the task.  All of this structural damage to the roof, framing, soffit and fascia will have to be removed, replaced and repaired along with restoring the electrical service.

The electric service on both Robert and Nancy’s homes were exactly the same.  It ran up through the soffit and fascia and poked up through the roof where the electric company would connect at the riser and the weather head.  However, most of these structures no longer existed or there was very little structure left and the vital components were gone. With the roofs now closed in with tarps we then began the process of getting electrical service reconnected.   Robert’s home was first, Dave’s was second and Nancy’s was third.  We had to have a temporary pole set at Nancy’s so that we could have power there period.