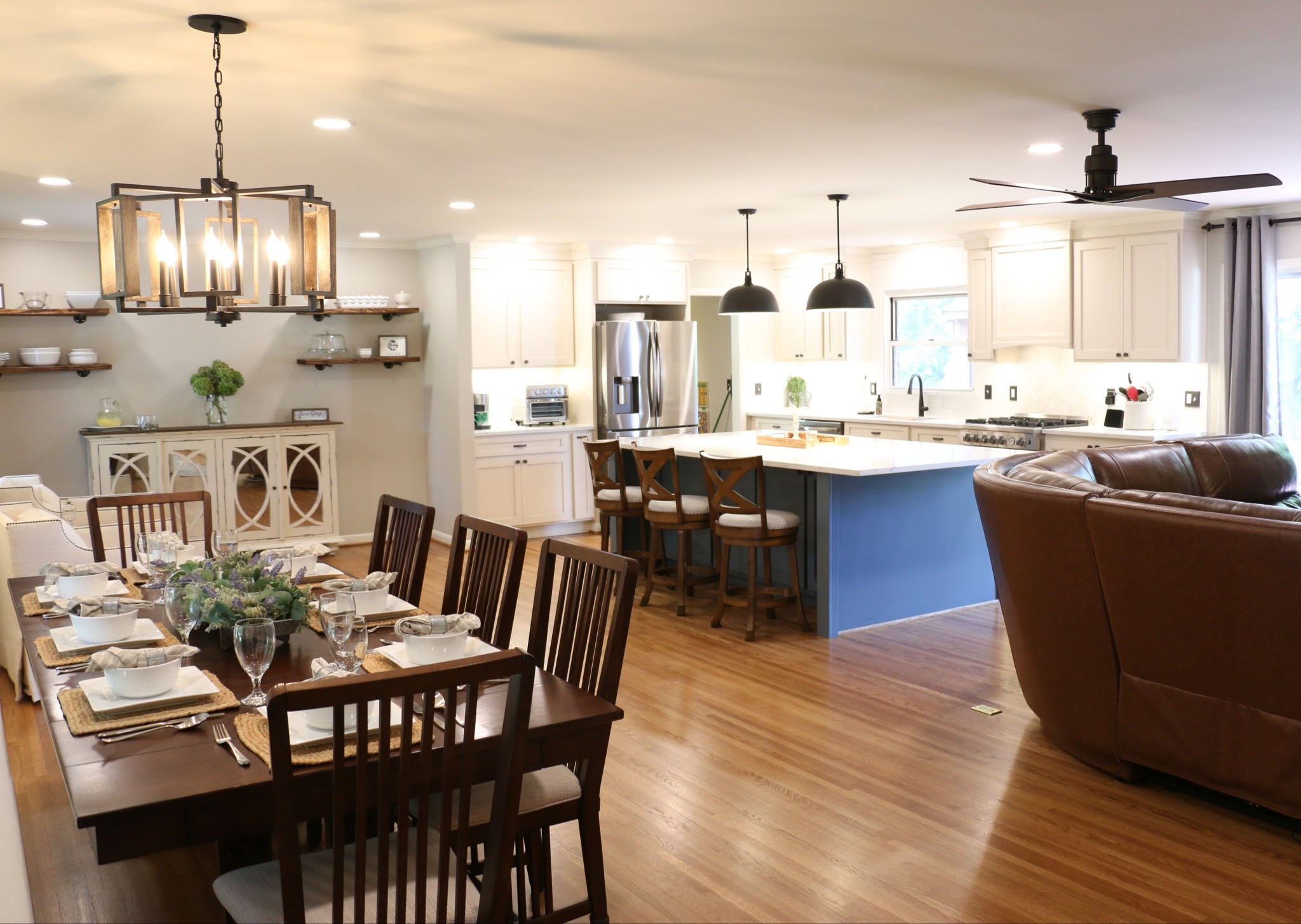 Our latest renovation project was close to home, quite literally.  Our clients happened to be our good friends and neighbors — the Capps family. This remodel was something they had envisioned since they moved into their home a decade ago. However, it wasn’t until the pandemic that they realized now was the perfect time. If they were going to be spending this much time in their house, they wanted to absolutely love it!

This traditional ranch style home was built in 1964. It has 3 bedrooms and 2 bathrooms. After flooding issues a few years back, the Capps decided to make the finished basement into a studio apartment which is where I currently live (see Living Through A Renovation, coming soon).

Before the renovation, the upstairs portion of the house was split into 3 main sections — the kitchen and sitting area, the dining and living area, and the hallway to the bedrooms and bathrooms. The kitchen and sitting area were separated from the dining and living area by a wall, which did not make the house conducive to being an entertainment space— a big priority for the Capps. That wall had to come down!

In order to keep the cost down, the Capps did a lot of the demolition work themselves. They took out all of the wall minus the studs (Pro Tip —  Do not remove the supporting 2×4’s on your own!) They demolished the kitchen tile and old hardwood floor in the sitting area.

Just taking the wall out made such a difference to the space! The room felt bigger, brighter and far more connected. Structurally, in order to compensate for not having the wall in the middle of the house, a pony wall (a giant beam that holds the weight that the wall used to support) had to be installed in the attic. Now, even the ceiling is completely flat—you would never even know there was once a wall there.

With the wall gone and the space now open, it was time to tackle the kitchen. Thankfully the Capps already liked the layout of their kitchen so nothing had to be moved — a major save for both time and money! The Capps, in preparation for this remodel, had been watching plenty of HGTV, so when it came time to choose stone, tile, cabinet colors, etc, they were ready! For their countertops, they ended up choosing Calacatta Laza quartz from MC Granite, which is a creamy white with blue and gray veining and hints of gold throughout the veining. They then chose a white subway tile to match, and the specific tile they chose is created to look handmade with hints of gold around the edges. The tile was laid in a brick pattern all around the kitchen, except for over the stove where they wanted a bit of a feature so they opted to do a herringbone style. This added just enough character as a little stand out piece.

However, their favorite part of the kitchen is the giant island in the center. It is 5×8 and clearly the new focal point of the space. The island features a microwave shelf, mini fridge, charging station, and plenty of storage, in addition to the seating area. The cabinets on the island are a beautiful shade of blue to bring out the blue accents in the countertops.

Once the cabinets and countertops were installed, the next big task was the flooring. Half the house had beautiful, old hardwood floors. The Capps decided that they wanted the hardwood floors to carry throughout the rest of the home. Like I’ve said in previous blogs, you can’t do a remodel without at least one thing going wrong. It is just the nature of the beast, and for the Capps renovation the flooring was the first and only hiccup in the project.

Back when this house was built red and white oak were used together to create the floors, but now they are sold separately. There is not too much of a difference, so they went with white oak. The flooring was laid beautifully, but the staining and sealing was where the issue arose. We went through multiple attempts, but despite our best efforts, it still wasn’t coming out exactly right. “Even though we ran into this issue, Larry was very hands-on and proactive to get it fixed even though it was no fault of his,” Jonelle says. Finally, Larry brought in a new subcontractor who came out to survey and very easily fixed the issue. Unfortunately, this hiccup did push the timeline back a few weeks. The Capps originally hoped this would take 6-8 weeks, but Larry, with his expertise, knew this was more of an 8-12 week job.

From the beginning, budget was a priority to the client. “Larry was very good about sticking to our budget, but he wasn’t afraid to make suggestions about things such as under cabinet lighting. He made us see the value of things because he is so knowledgeable,” said Jonelle Capps. One thing DeRo Reno prides themselves on is their ability to ensure that the client gets what they want and to help clients understand fully what they want. Larry and Jax knew what the Capps were asking for without them even having to say it. For example, they wanted a clean kitchen with a dash of modern farmhouse chic, so Larry and Jax added the same stone used for the countertops as the windowsill. Then, they picture framed the window with the subway tile. The Capps loved it and are grateful for DeRo’s vision.

The rest of the space was fairly straightforward. It needed a few electrical things such as adding a fan, adding outlets, moving and adding overhead lighting, and adding a fresh coat of paint. We also touched up some of the masonry work on the fireplace. When asked about DeRo Reno’s work this is what the Capps had to say — “We will definitely use them again! We are already planning our next remodel. They did quality work that far exceeded. It really speaks for itself”.