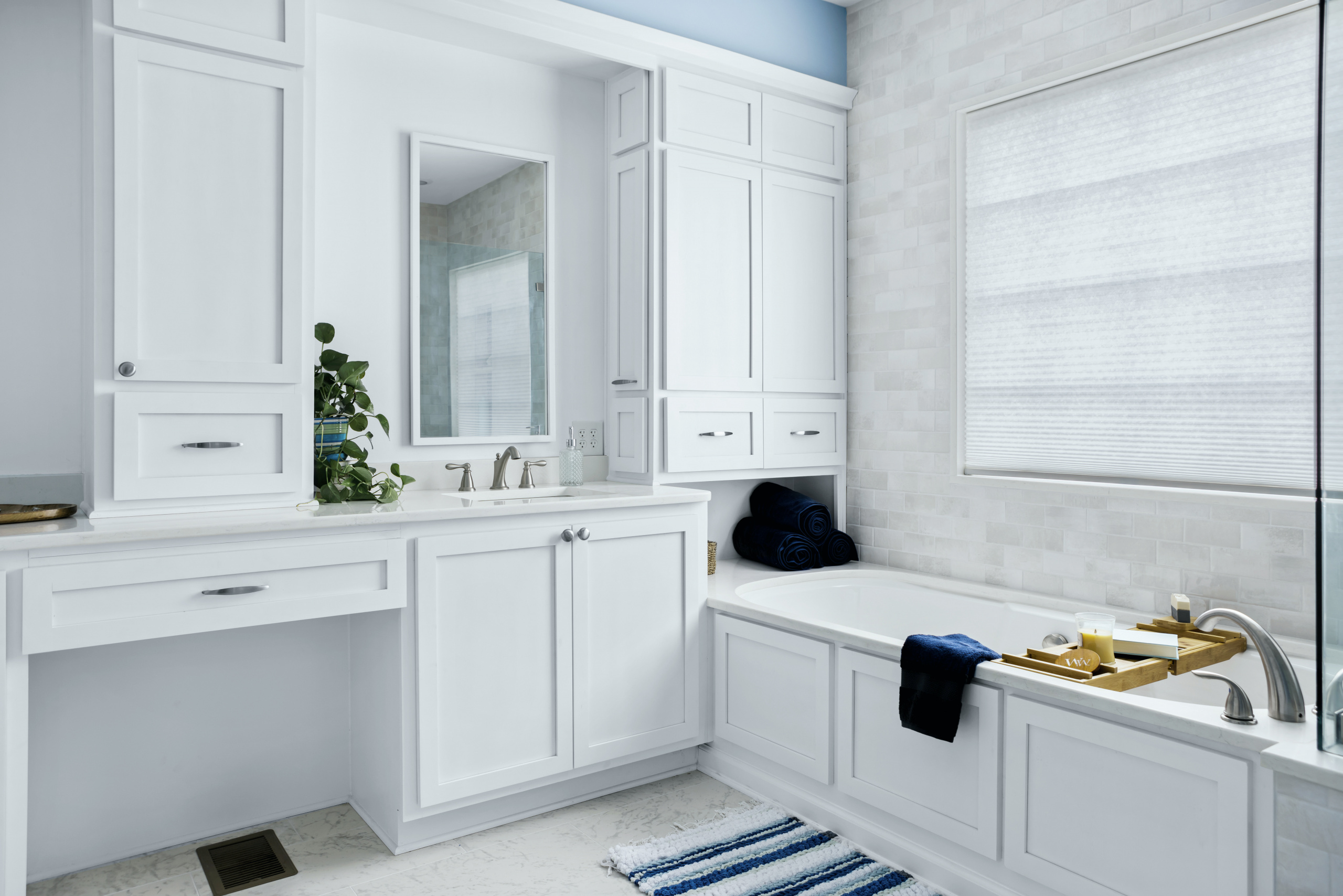 The Paulsons have lived in their home for a little over a decade. During that time, they have undertaken a number of renovations to their house- finishing out their basement and attic, replacing their deck, and more. In 2021, the next item on their renovation list was the master bathroom.

Peggy Paulson explained that they wanted to “age in place,” optimizing this home to be their forever home. For their bathroom, this meant a number of practical changes. But for the Paulsons these practical improvements were to go hand-in-hand with a fresh, new bathroom ambiance and clean, modern aesthetic . For example, the renovation included replacing the old tub with a new one selected by the Paulsons for its unique design; it has a seat that allows the user to sit and soak their feet, or the user can get all the way in! Fresh shower doors were also on their list, as well as finding a way to utilize dead space between the counter and the tub and increase storage space.

During the planning phase, the Paulson’s did what every homeowner does – collected quotes for their project. Peggy explained that DeRo was the most transparent about cost and what the project would entail. “I talked to some other contractors and they said ‘Well we just have to take all the walls out. But Larry did not do that,” noted Peggy: “I do not like renovations for renovations sake so if a wall doesn’t need to come out, then it doesn’t need to come out.” A clear plan from the DeRo team, detailed estimates, and a willingness to listen won the Paulsons over.

In planning and executing the renovation, the DeRo team had to be innovative to achieve one of the Paulsons’ goals – to make use of the dead space between the counter and tub. While traditional cabinets would have added storage, tall shelves would not remain practical for the couple. The DeRo team’s solution was to have a pull-out shelf, like one might have for spices in the kitchen. This created storage by removing the need for tall shelves and added a place for towel storage next to the tub. Additionally, the outlets on the bathroom counter remained usable while the shelf was out. This added the storage the Paulson’s required while keeping the bathroom footprint the same. This was the largest creative challenge of the project.

The largest practical challenge of the renovation was the fact that the Paulson’s were out of town for the majority of the time. While this would (understandably) make any homeowner hesitant to have a renovation performed, the DeRo team had exceptional communication skills. Peggy explained that Larry was careful with whom he shared the house and community codes with. If the person did not directly work with Larry, Larry was always on-site to provide the person with access to the house. Peggy went on to explain that communication was fantastic: “Larry texts everything. There was never a time I could not get a hold of him or had an unanswered question. It really did go very smoothly.” When the Paulson’s were at home during parts of the renovation, they shared the team was “…all nice guys, the kind of people you want to have in your home. They were respectful of me [Peggy] when I was there and my privacy.”

“He [Larry] did exactly what I wanted him to do and it’s perfect!” raved Peggy. She went on to say she would definitely recommend DeRo. Their new bathroom is gorgeous, bright, and sophisticated. Anyone who sees it is sure to understand why the Paulsons aren’t moving anytime soon!